When you first see Yann Giguere, you notice his long beard.  Then he speaks and you notice his French Canadian accent.  You think, "Ok, this is not the typical guy you see at a Salem ball game."  And he's not.

Then, when you see what he can do with piece of wood, you realize he's not like other handymen either.

As I detailed in the TV story, where you can actually see what Yann does, as he does it, Yann uses uber sharp blades to slice through the fibers, creating a smoothness that cannot be had any other way. 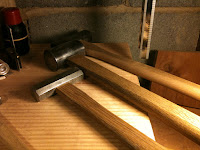 When a friend first told me about Yann, I asked what made him so different.  The best my friend could offer was to say, "He doesn't use any sandpaper."

Well, sure enough, he doesn't.   But that's just the tip of the iceberg.  Yann has nothing against sandpaper.  It's just that he doesn't need it.  Why would you sand something that is already so smooth it glistens?

Yann is to other woodworkers, what Yoga is to basketball.


And there's much more.  Yann is to other woodworkers, what Yoga is to basketball.  Both Yoga and hoops are exercise, but they work the body very differently.  He works with an inner calm.  The Chi in his word, Mokuchi comes through in a big way.

He sits on his work instead of using clamps.  Or he might put a stocking foot on the wood to hold it in place.  The sharpening of his tools is a ritual in itself.  He squats like a baseball catcher, rubbing hardened Japanese steel on stones with fine grit.  It takes hours and hours -- and dedication beyond any suburban existence to accomplish this literal oneness with the project.

It's funny.  Because Yann understands how it looked to me and to others who have seen him do his thing.  But he's very upfront about things like deadlines, and the need to make money and make the customer happy.

Sounds more like the business people I deal with every day.   Hurried.  Rushed.  Yann is none of those.  You get the impression that he would never sacrifice anything just to meet someone else's deadlines.

He became philosophical during our on-camera interview.  (Or maybe he always is, and I just looked past it for while.)

"For some reason people often think this work is meditation and yess, it can be, but a meditation doesn’t mean, you know slooow... looking off into the clouds," he said.  Then he paused and his eyes showed he had arrived at  an aha moment.  He looked at me and said, "It's focus. Yes, focus."

I doubt I'll ever feel the inner peace that seems to dominate Yann's existence.  Too much hurry in my life.  I'm betting that's true for most of us.

But it sure is something to watch him use those blades to create his masterpieces.  I think it's a heck of a story.