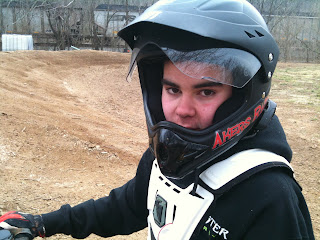 This wasn't a story I was looking for. It found me in a big, loud way I couldn't ignore.

Earlier this year I jumped at the chance to be a judge for the freestyle portion of the Monster Truck show at the Roanoke Civic Center. As I sat down I met my co-judges, one of whom was Tequita Akers. Tequita knew more about the goings-on behind the scenes than anyone I had ever met, and I asked her why she was so in-the-know. 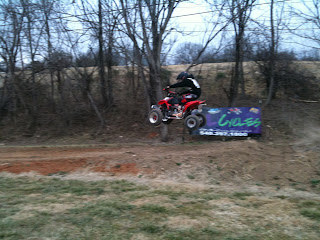 Turns out her husband Larry was doing some of the heavy equipment work in the arena that night, and her son, Grant was a junior ATV racer -- who would be racing between the truck events that very night. 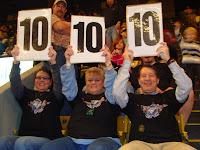 As the night wore on, she started filling me on on Grant's success.

Undefeated. Sponsored. Has his own track in the Glenvar area of Roanoke County. 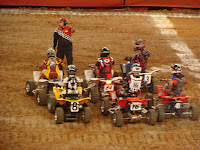 Obviously I was intrigued, and we made an appointment to visit and shoot a story for the Fox 10 O'clock news.

I was amazed at the amount of stuff the family has dedicated to Grant's pursuit of ATV excellence. 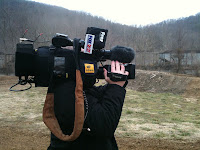 In addition to his custom, $18,000 "bike," there is a custom enclosed trailer with his name, and number on the side. There are more trophies and outgrown helmets than some people might possess through an entire career. Yet he is only 13.

His parents are both proud, as you'd expect. His mother supports the effort 100-percent "Though I get nervous at every race," she said. 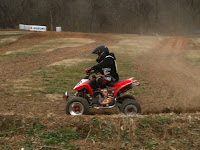 We watched Grant go through the paces on that custom track that Dad built for him, using his own tractor, and top soil that was trucked in. His grandparents came to watch with us.

Safety was evident everywhere. Lots of instruction from Dad. the track had been groomed for our arrival, but Grant was careful not to go "too fast" till he had made several laps to "groove it in."

All in all, it was an interesting and enlightening day. 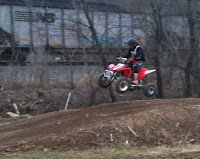 If Grant want's to go pro, and race as an adult -- I guess this is where and how you start. I haven't had much time to research what pro ATV racers do, where they do it or how -- but I've been assured it's a lucrative career, if you can make the grade.

Let's wish Grant a happy and safe pursuit of success at the next level.

His dad has uploaded videos to You Tube of Grant racing. Click away to watch more.

John Carlin's Virginia Airs on the Fox 21/27 10 O'clock news on the first and third Tuesdays of every month. Please subscribe to this blog to stay up to date on the interesting people places and events he visits here in the beautiful State of Virginia.
Posted by Unknown at 2:18 PM No comments: 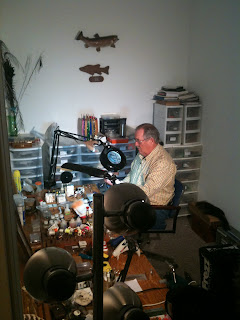 I’ve resisted the temptation to do many reports on fishing. It’s such a compulsion, that if I didn’t rein it in, the segment would be called John Carlin Goes Fishing, instead of John Carlin’s Virginia.

That said, today was the perfect day to shoot a story on tying flies. (If you’re not familiar with the process, you need to know that tying flies is the same as making lures. Only you make “lures” or artificial baits out of animal hair, feathers and plastic and then present them to the fish with a fly rod.)

Dover England is well known to local fly fishers. A member and former president of Trout Unlimited, he is a master fly tyer and fisherman as well. He is one of those people who just think like a fish. He knows how the weather, water temperature, time of year and sunspots affect the fish’s behavior. (Ok – I made up the part about the sunspots.) He has taught a course on fly fishing at Hollins University, and countless others how to fool a trout. 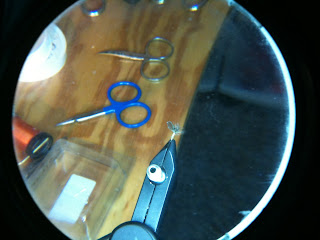 The plan was to do an indoor story on an outdoor pursuit. And we did. We watched in awe as Dover sat in a room at his South Roanoke home and crafted several flies, which were more like works of art. He even made several of his own, Dover’s Peach flies, which are now sold around the world by major retailers.

The story could have ended there, but Dover said he knew where there were some trout within walking distance, and nothing would do but what we try those very flies in the Roanoke River. 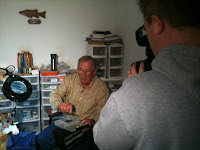 So off we went. Our waders were little match for the cold, but Dover’s creations were more than a match for the trout. We hooked several and landed (and released) two in less than 45 minutes. 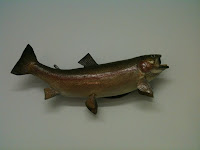 Thanks to TU President Bill Bainter for helping me locate Dover, and for coming along to watch the shoot and lend his support. He told me about several other TU projects that may well wind up as topics for this segment in months to come. Trout in the Classroom is a program in which local school kids raise trout and release them into local streams. Another program called Project Healing Waters, is designed to help our veterans by getting them out on the stream.

After all it’s hard to pass up a good fishing story.

Dover is a "retired" fishing guide. But he still takes the occasional client fishing.
to contact him, e-mail doverengland@gmail.com. You can call him at 540.525.1991.
Posted by Unknown at 2:37 PM No comments: 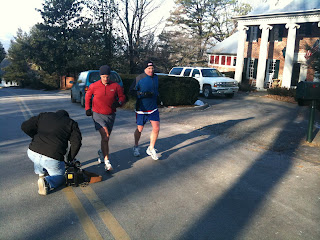 The Blue Ridge Marathon is coming up on April 16. Last year’s event was billed as one of the toughest in the country, what with climbs up Mill Mountain and Roanoke Mountain.

Then, we on the organizing committee realized that it might just be THE toughest on-road marathon in the nation. (There are many trail marathons which are tougher) So the committee decided to go for it – to solidify the position as the toughest in the USA – by adding another major climb. 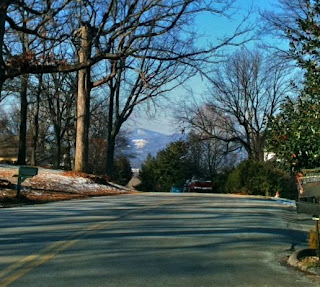 That climb is Peakwood, in South Roanoke. It winds uphill for about 1.6 miles at an average steepness of 10-percent. Runners in the marathon will hit it at 17 miles. After climbing Mill Mountain and Roanoke Mountain.

Our story on this day focused on the climb itself. Thanks to local marathoners Troy Lenderking and Matt Bullington for tackling the run and giving us their appraisal. Both are excellent runners (Matt finished 6th in last year’s National College Blue Ridge Marathon.) To be fair, like me, they are members of the committee. But they had not run the route before this day, and their assessment was honest – it’s going to be hard. 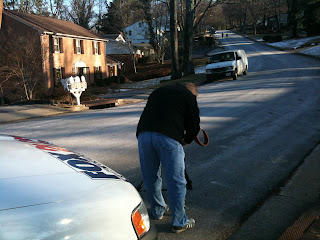 Don’t forget there is also a half marathon option, and this year there is a category for walkers. It is not nearly as rigorous as the marathon – but still a great goal to get you healthy and in shape for summer.
Posted by Unknown at 2:29 PM No comments: