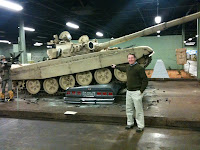 Although I’ve reported news in Virginia since 1984, and have literally been to every corner of the Commonwealth, I had to do a double take when a friend told me there was a Tank Museum in Danville. Not just a tank museum, but the “largest privately owned artillery and tank museum in the world,” according to the owner, William Gasser. Somehow I had missed this one.

So imagine my amazement when we pulled up to do a story on a small section of the museum, which according to Gasser, and I have no reason to doubt him on this – is “the largest indoor radio controlled tank battlefield in the world.” 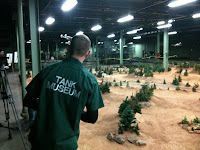 Not only is there a miniature European village in which toy tanks battle, but it takes several minutes to walk there from the entrance of this massive museum (330,000 Square feet or 3 times as big as the average Sam's Club). As you walk by, you pass an amazing array of actual battle tanks, uniforms of every kind, and items of artillery I don’t dare name, because I would almost certainly over-generalize and call a Gatling gun a machine gun or vice versa. And besides, I was there to do a story on the radio controlled battlefield, which has it’s own detailed peculiarities. 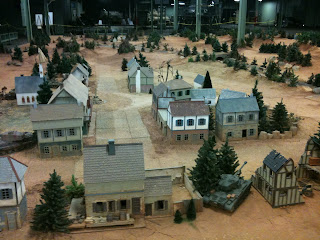 The mini-tank battles, which take place on said battlefield, pull players in from all over the country. Owners start out with kits, but by the time they are firing infrared bullets at one another in what amounts to a very large and sophisticated sand box filled with clay, a flowing river and model houses, they’ve dumped about $1,000 into each vehicle. 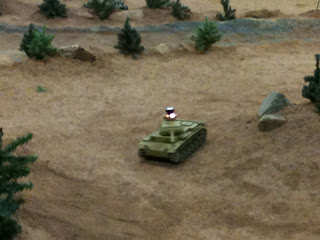 The model tanks take a bit of practice to drive. Learning to turn, raise and lower the turret is another skill and then there are all the military tactics. "Flanking is a big one,” William’s son, Daniel and museum employee told me. He also pointed out that breakdowns happen in RC battles just as they did in Europe in 1944. “These are tanks that are just like a real bulldozer. They destroy themselves while running. They throw tracks, wheels fall off, and transmissions go out. It’s pretty cool when it happens cause you can still battle, but you’re a pillbox,” he told me during our interview. 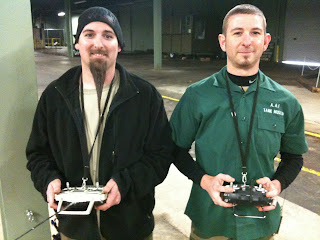 Bottom line is that the entire facility is an accomplishment in itself. William, and his wife and two sons run the place, having moved here from Long Island to take advantage of the available space. Now, they’ve amassed an arsenal’s worth of militaria, and they need visitors to survive. Not exactly easy in a struggling Southside economy, and a place that isn’t on the way to anywhere most tourists are headed. (Tour buses won't come because there's not second attraction," William told me.) 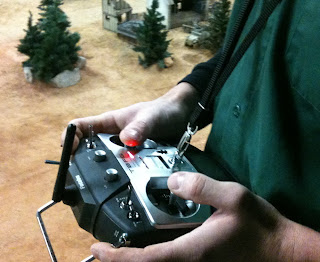 I wish them all the luck in the world. If you have any interest in things military, they expect thousands of visitors for their Extravaganza on April 30 and May 1. More information is on their website.
Posted by Unknown at 1:48 PM