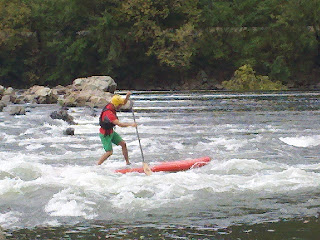 The whole time I was on the river with Luke Hopkins, it never occurred to me to refer to him as "Luke Waterwalker."

We talked about walking on water, which is cool, and let's face it not far from what he does. But it's also a parallel for his rare abilities.

Not only is he an accomplished paddleboarder and water sports enthusiast in general, i.e. kayaker, canoeist, rafter etc., he is a born inventor. And marketer.

He told me a story about how he was displeased with his life jacket, when he was in college, so he called the company to make suggestions. Within a few minutes he was on the phone with the CEO of the company. Within a few days, he was sitting in the company's R & D facility, making changes to the product. He taught himself to sew, so he could both design and build. And now 7 years later the company is still using those designs.

It's the same way he approaches his business. He's designed and built -- using proprietary techniques a surfboard that can be carried in the trunk of a car or on an airplane. But most importantly it can withstand the rigors of river use.

Not satisfied, he then designed the paddles. One of the new ones has a blade that's faced with bamboo. "It's light and it's cool," he said.

Add to that his absolute zeal for using his own products. "I've been up and down this river as many as a dozen times on a given Saturday," he said of the McCoy Falls section of the New River near Blacksburg. I take both of my dogs on the board with me, one of them won't fall off even when I do," he boasts.

I say "boast" but I don't mean brag. This is a guy who is really good at what he does. He really loves it, and lives it -- assembling the products with a handful of employees in his Blacksburg shop.

Also of note is his mantra, "Erase the Trace." Like other things he does, it takes a concept to another level. Outdoors people are familiar with the notion to "leave no trace." That means not to litter, or leave open fire pits or anything that would ruin the experience for the next person. Luke's concept with "erase the trace" is that we should clean up after others.

"If we all just pick up some trash while we are on the riverbank, or even in the water and take it home for disposal, the river's wold be even better," he said.

It's a good thought. Luke Hopkins doesn't actually walk on water -- but like I said in the story -- it's about as close as humans will get. I wish him well.
Posted by Unknown at 11:35 AM No comments: