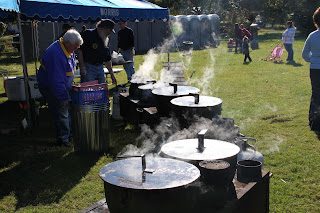 Like many people I had waited in line at the Blue Ridge Folklife Festival for a taste of Black Pot Chicken.  And like many, I finally tired of waiting and walked away.  This year I decided to get to the bottom of it.  Or at least try.

As I interviewed people for this story as they stood in line, it was a common refrain.  Like a marathon, a mountain climb or Black Friday at the electronics store,  people were determined to get there.

In the television story you can see the sizzle of the chicken cooked in peanut oil, and almost smell the aroma coming from the golden brown legs, thighs and breasts, as the Patrick County Ruritans go through their familiar paces.

To re-cap:  The Patrick County crew was at a national conference in Philadelphia in 1976, when some kindly and elderly fellow Ruritans gave them a copy of their own secret recipe.  Only one man, Phil Plaster, was given the secret, and to this day, only Phil has it.  It’s in his head and his safe deposit box.  His wife and his will have instructions about who gets it next.

The local guys came home and tried it at a July 4th celebration and knew they had a winner.  They signed up for a spot at the Blue Ridge Folklife Festival and they’ve been there ever since.  And so have the lines of people.

The guys I interviewed -- cook Will Walker, chicken batterer Ronnie Mabe, and secret holder Phil Plaster seem to love all this.  They grin when they talk about everyone leaving the room while Phil adds the secret ingredients.  They cut-up about Ronnie Mabe outliving Phil just so he can be next to know.  Will Walker, who is physically closer to the line of people by virtue of being the cook, has had ample opportunity to practice his answer to the inevitable question, “What makes this so good?”

“I just do the cooking,” he dead pans.

Once again the great part about this job, and this segment, is that the people are so real.  These guys just enjoy what they do.  Go to a festival and sell secret chicken to appreciative festival goers.
Posted by Unknown at 7:22 PM