For the second segment in a row we have focused on talented local musical acts trying to accomplish the same thing as the American Idol contestants.  How hard is it to make it?

After Jack is an interesting band to say the least.  Three young women -- all talented actresses, musicians and vocalists who play a twangy, bluegrass or "roots" oriented sound that ranges from Lady Gaga to their own song, Bless Your Heart.

All three live in the same old farmhouse out in the country.  What a hoot it was to record our segment as they practiced on their front porch.


In the previous segment I asked local rockers Madrone how hard they were willing to work to make it.  The four young men said they would work as hard as they could, but have no delusions about being the next Metallica.

I had hoped they would say they wouldn't quit till they had a wall full of gold records, but that wasn't their answer.

Ditto for After Jack.

"We work for the privilege to continue working," said Emily Rose Tucker.


"We work for the privilege to continue working."


In other words we hope to be good enough to get another gig.  And then another.  And another.

Like Madrone, the members of After Jack want to build a following, get better every performance and see "where it takes us."

You have to admire that.  Last night (May 14) I had the honor of speaking to Roanoke's B'nai B'rith award winners -- essentially the true who's who among Roanoke Valley High School seniors.

I shared with them the thought that they needed to figure out what they loved and where they excelled and to pursue that.  I asked them, "How many people who work in cubicles, 'work for the privilege to continue working?'" 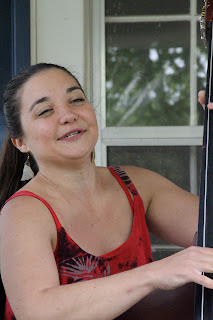 Look, we all have to work for a living, and few people with responsibilities can pack up and hit the road chasing a dream.  But if you have the talent and the passion.  If you know that's who you are, why not?

Emily Rose Tucker, Rachel Blankenship and Mary Allison, whom I've seen perform in the Jack Tale Players and in musical productions at Ferrum College seem to me to have the presence and talent to entertain the masses.  They have only been After Jack for nine months.

After a lifetime of performing each said they felt a certain success with this band they had not felt before.

I hope one day we see them on the Grand Ole Opry or hear them on the radio or interview them when they make a gold record.

But for now, they are just hoping to be good enough to "keep on working."
Posted by Unknown at 2:35 PM No comments:

Madrone: Rockers Trying to Make It.

During May, I am talking to two bands who are trying to "make it" in show business.  This blog is dedicated to the Roanoke based rock band Madrone.  The segment on May 15th will focus on the all-female band After Jack.

I don't have a musical bone in my body, but I have always appreciated those who do.  Like many of you I watch American Idol and I see an enormous amount of talent.  When it's down to the final groupings, it's really hard to say who should stay and who should go.

But then even the winners don't often stick around for long.  Why?  Why do some people make it and some not?

Before American Idol and the other shows that have attempted to capitalize on the concept, people had to make it the the old fashioned way.
They had to earn their way to the top.  I thought it would be interesting to look at two local bands who have created a following to see what it takes.

I keep thinking of the Frank Zappa song, Joe's Garage, that we played on the college radio station:

Local rockers Madrone, made up of JD Sutphin, Joey Coleman, Blaine Davis and Tanner Dogan seemed the perfect people to ask.  They have had a top 50 hit on the rock charts.  (Daybreak) They play 150 gigs a year and they have opened for some bands that have already made it to the next tier.

They don't play in Joe's garage.  They play in JD's basement.  They have cool stuff all around their half of the cellar.  The other half has washing machines and lawnmowers.  They are living the dream.

We could jam in Joe's Garage
His mama was screamin'
His dad was mad
We was playin' the same old song
In the afternoon 'n' sometimes we would
Play it all night long
It was all we knew, 'n' easy too
So we wouldn't get it wrong


Madrone let me sit in on a practice session, and they answered my questions with enthusiasm.  They are as anxious to tell their story as they are for their next gig.  They love what they are doing.  Each band member said plainly that he would rather play music than do anything else.

For now -- they are all willing to do whatever it takes.  I expected that.  What I didn't expect was the definition of "making it." 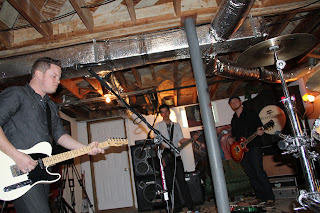 While JD says it would be "awesome" to tour in the band's own bus, "pulling an suv," for the most part the consensus was that they would be happy to always be improving.  To hone their sound so that it is in fact their sound.  You hear the music and you say, "Oh, that's Madrone."

And they are working hard, in JD's basement to do just that.  "We'll never be Metallica" I heard during the interviews.

Well, maybe not.  I'm not qualified to say who has what talent.  But I think it's an interesting question, and in the meantime Madrone is on a roll to who knows where.