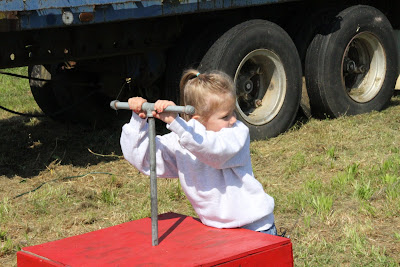 Every television station in America will air a story on something unusual to do with pumpkins this fall. There are the stories about underwater pumpkin carving, pumpkins so large they must be lifted with a crane, and the fine art of carving intricate faces and designs that go well past the toothy grin of the jack-o-lantern on your front porch. 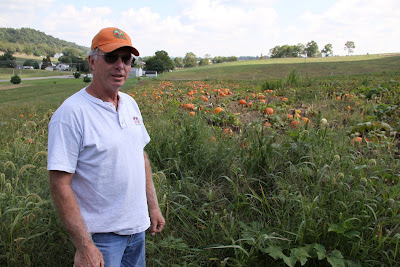 Into that mix then comes the genre of stories involving clever ways to hurl pumpkins across the field -- or in some cases, many fields. Delaware even hosts the national competition for pumpkin hurlers.

There are trebuchets, slingshots, and in the case of my own story, canons.

This is all great fun. Really. You might say it’s wasteful to splatter pumpkins across some random hillside, yet people line up by the hundreds to either see or do it. I’m betting you couldn’t take your eyes off the video of the Umberger brothers and young Makaela shooting these perfect pumpkins into next week.

We can wonder why it’s so much fun, perhaps even debate it. But for Bobby Williams, the third generation of his family to operate Williams Orchard it’s simple: money. 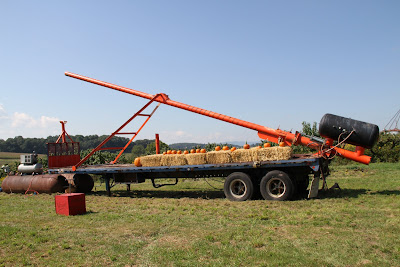 His grandfather started the 700 acre operation in the 1920’s. “Back then we could operate by growing things and selling them to local people,” he told me as we stood in front of the store that still sells apples, locally produced preserves, and yes, pumpkins. “Back in the 50’s and 60’s people had root cellars and they would back in here and buy a pick-up truck load of apples and store them all winter.”

The pumpkins, led to hayrides, pick-your-own patches, a corn maze, wholesale vending and the Punkin Chunker. Though the store is full of apples, Williams says pumpkins do more business. “It’s about 60-40 pumpkins,” he said.

Williams isn’t alone. Farmers across Virginia are turning to “agri-tourism” or as Williams calls it, “agri-tainment.”

That’s why he conned his son-in-law, Patrick Umberger into designing and building the Punkin’ Chunker.

It’s five dollars a pop, to shoot the Chunker, using a Wile E. Coyote-looking plunger device, but that’s not really where the money is.

“Oh, we make some money from people coming to shoot it,” says Williams, but really, it’s just an attraction.” 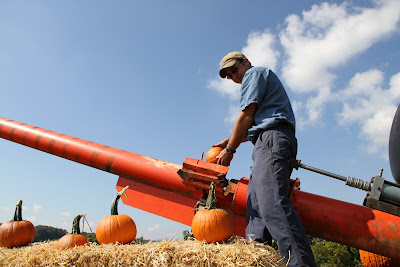 That it is. You can buy a pumpkin at Wal-Mart. But if you want to see a pumpkin launched out of sight from a 40 foot canon, you’ll need to drive a bit.

Williams is betting you will. 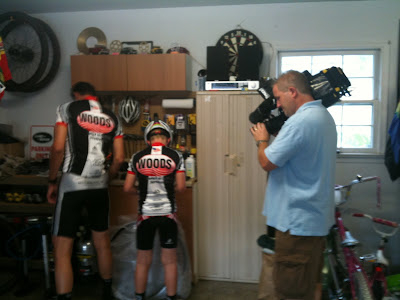 Troy and Tyler put on their gear before riding.

To view the story that aired on Fox, click here.

Anyone who knows me well, also knows that former Roanoke Police Sergeant Stan Smith and I go way back. We started running together in the mid-90's from the Roanoke YMCA.

Stan and I would run no matter the weather, 12 months of the year. There were the hottest, most humid days in the summer when, post run, with shoes literally squishing from sweat, we would compare our clothing to see who might still have a quarter-sized area where the sweat hadn't penetrated. If there was a single dry spot on your body then you were the loser as the other had pushed himself just a little harder.

There were many, many cold, windy, snowy and icy nights when we were the only ones running through Smith and Wasena Parks. Neither one of us wanted to be the one who backed out. So we ran. We took a lot of pride in being the hardiest souls on the road.

During those runs, Stan would talk about his son Troy, whom I later met and admired as a first class cyclist. As Troy grew into a competitive rider, I would receive updates on which events he was racing and how often he had won.

Later, a proud new grampa, Stan would talk of Troy's son, Tyler. The first steps, the first word -- all the typical grandpa stuff. A few years later he would tell stories of Sunday afternoons with Tyler in at Green Hill park, helping him to ride his little bicycle.

Eventually the police chief shifted Stan's schedule and we were no longer able to run as much. Then Stan discovered cycling, and his running days were behind him. Stan had become a cyclist.

I would occasionally ride with Stan, but there was no regular mechanism to keep us on a schedule. So we stayed in touch, but drifted apart somewhat.

Fast forward to this year. I'm participating in the Wilderness Ride in the New River Valley with my wife Mary and some friends, when Stan and a large group come rolling up at one of the rest stops, In Stan's group is grandson Tyler. Tyler was ten or eleven at the time and much smaller than the adults in the group, but he had a nice bike and full cycling kit (outfit). I asked Stan if Tyler could do the entire ride of 75 miles and he just laughed. "This is a walk in the park for Tyler," he said. He then told me about all the races Tyler was entering and winning -- often against boys three and four years older.

I made a mental note, "that's a good story."

So that's the story we did. Three generations of cycling Smiths. Stan the now-retired police officer, Troy who is still the MAN in Roanoke cycling circles, and a former member of the Virginia Tech squad, and now young Tyler who seems unfazed by weeks of cycling that include up to 300 miles. They often ride together.

During one of the interviews for the story Stan mentioned people he knows who see their grand kids, once or twice a year. He wonders how they can see so little of their grandchildren.

Others might wonder how Stan, Troy and Tyler crank out 30 mile rides as easily as most people walk their dogs.

When conceptualizing this story I really couldn't decide where to put the focus. On Tyler's success at such a young age? On a close knit family that rides together? Of three generations who just love bicycles. Maybe a focus on the DNA that enables them to do what most people cant?

In the end, it was a little of all four. I'm not sure what your take-away will be except that it's pretty cool and that as they say, the apple doesn't fall far from the tree.
Posted by Unknown at 3:31 PM No comments: