The Shot Tower -- An American Curiosity 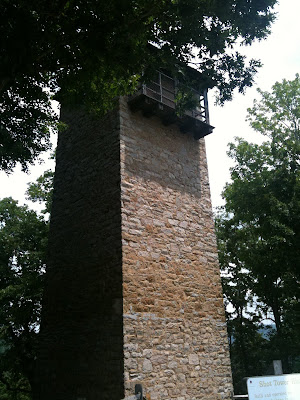 The Shot Tower, along the New River Trail in Wythe County captured my imagination years ago. It would have been in the late 80's or early 90's when I discovered the trail as a place to ride my mountain bike. (They had just become widely available at bike shops.)

We did family outings on the trail. First with my now college-aged boys riding on the seat on the back of my bike. Later they rode their own bikes on the hard-packed surface enjoying a ride that offered nothing in the way of hills, and plenty of excitement with trestles and old railroad tunnels to ride over and through. 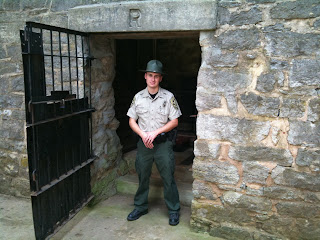 And there above the trail just off Interstate 77, was (and is) the Shot Tower.

In the TV story we showed how liquid (melted) lead was dumped through a sieve creating droplets that fell 150 feet. Along the way they would harden into perfectly round musket balls, or smaller, bird shot. At the bottom, the lead's fall was cushioned by a cauldron of water. Conveniently, the bottom was at river level, and boatmen could transport the product down the New River. 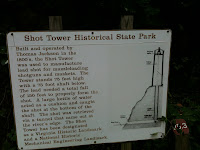 Though it was only used for actual shot making for a brief portion of its 200+ year history, from approximately 1804 - 1839, it stands today as a marvel and a curiosity.

On the outside, the part that sticks up into the air is a graceful structure, and unlike anything else you've ever seen. From the entrance looking down, is a shaft that drops 75 feet through solid limestone bedrock. I asked how they made that hole back then. 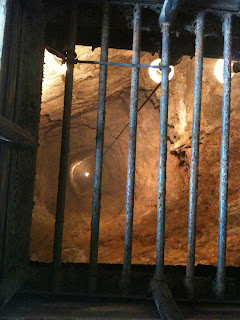 One of the many tourists who showed up while we were shooting the story asked, how they knew that 150 feet was the proper distance. 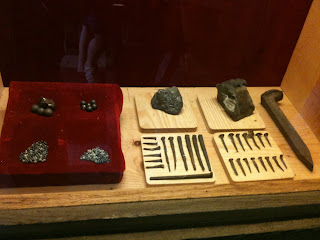 It goes back to England and a man named William Watts, who built a tower on the side of his house and kept adding on until he got the distance right. Thomas Jackson brought that information with him to Southwestern Virginia.

Somebody in the group remarked that Watts must have had a very understanding wife, to allow him to build a tower on the side of the house and play with molten lead.

Whether its carving a 75-foot hole into the landscape, making musket balls or figuring out how to make musket balls, it's cool to have the chance to marvel at how we arrived where we are today.

If you would like to see the Shot Tower, you need to plan to be there on a major summer holiday. (Labor Day is the next one on the schedule) or contact the New River Trail State Park headquarters at Foster Falls. The Rangers that I worked with on this story said they typically try to accommodate as many requests as they can -- but it's impossible to handle everything.

You might also be interested in volunteering to lead tours through the relatively new Americore program, which provides tour guides and or interpreters at all 35 of Virginia's State Parks.
Posted by Unknown at 5:47 PM 1 comment: 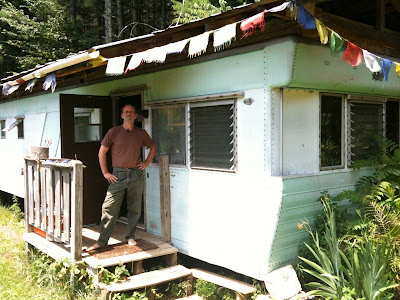 The first thing you should do is check out Kurt Steger’s pronounced “Stager”) website. If you have any doubts about his talent or the authenticity of his approach that should settle it.

It might very well be that he could mass produce pieces of art with his look and style. The fact is that he doesn’t.

He sequesters himself away on his mountaintop retreat, living in a small (I mean small trailer--maybe 300 square feet?) and living with his work. 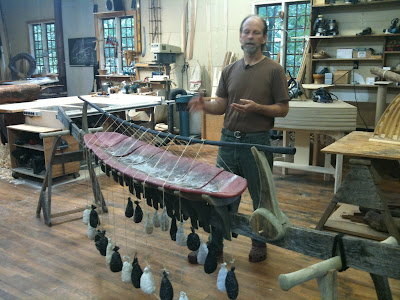 He “watches” pieces of wood in their natural setting for years. Pulls them to the front of his work shop and “sits” with them (not literally) for sometimes months, until they tell him what it should look like as a finished product.

“What I want to point out is that we are always in connection with nature. Man and nature are always coming up against each other. Whether we are in the woods or in NYC we are always on that edge of meeting nature,” he said.

If you look at his work in any detail, you’ll see that he focuses on that place where man and nature meet. He is obsessed with it.

Think about how his approach to what he does compares to yours. Let me tell you that in my section of Roanoke County suburbia which I affectionately call cul de sac corner, we do not sit around and look at pieces of branch or roots until they “tell us what to do.”

Nor would we take one another seriously if we did. We are too busy running to soccer games and driving mini vans. Yet, after half a day with Kurt, who has forsaken family life to live a hermit-like existence, you understand that he is legit. He needs that time to:
a. think about the work
b. complete the work.

He simply is not willing to compromise. He wants to be able to kick off his shoes (“I prefer to work barefoot.”) and work to the wee hours of the morning if the mood strikes him, or in some cases, if he is driven by the passion to see a work manifest itself. 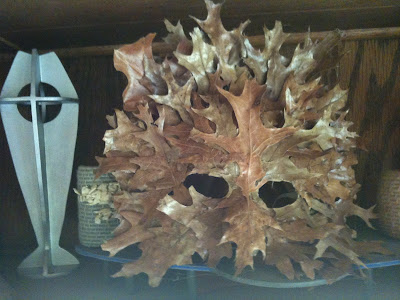 We went there to do a story on the Burden Boat Project, which in fact we did. But I am most pleased to have had the chance to meet Kurt, to see how he thinks and to realize that he is what he says he is.
The Burden Boat Project will appear at the Smith Farm Center for Healing and the Arts, as part of a show entitled, The 9/11 Arts Project. Healing 10 Years Later.

From the Smith Farm website: At the core of our work is the belief that each of us harbors enormous powers of healing within. We also recognize that there are both new and time-tested techniques to enhance health and well-being- even in the midst of crisis. Our integrated approach of stress reduction and inner quiet, art-making and telling your story, supportive listening and loving community, healthy lifestyle choices and state-of-the-art medical care can birth simple yet profound changes that radically transform the experience of illness.

The show runs from August 22 -- September 30, 2011. During that time visitors will be asked to write down their burdens on a piece of rice paper. When the show closes there will be a ceremony only this time Kurt will use water instead of the traditional fire. "Fire is too closely associated with the tragedy," he said. The water will destroy the rice paper and with it, the burdens written there.
Posted by Unknown at 7:16 PM No comments: