Of Giant Holes and Iron Mines 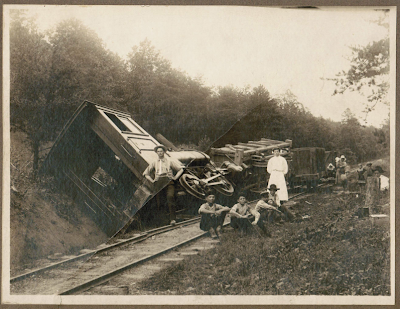 This is a picture of overturned ore cars on the narrow gauge railway that carried iron ore from the area around the back of Mill Mountain to the valley below. The photo belongs to Roanoker Ralph Campbell.


I’m not sure if this is a story about history or recreation.

I know that my interest originated while hiking, running and dog walking on the Chestnut Ridge Loop trail near Mill Mountain. (The five-plus mile trail generally loops around the Roanoke Mountain Campground.)

I spend a fair amount of time up there but it took a while to realize that something wasn’t right. The land just didn’t lie naturally. There were humps where there was no reason for humps. Ravines you would expect to have been created by creeks did not have water in the bottom.

Something else must have created the topography. 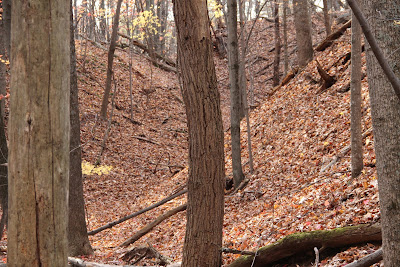 During a dog walk one Sunday morning; friend Dennis Campbell told me iron mines were the cause. He spoke of a narrow gauge railroad that once hauled the ore to the valley floor where it was scrubbed before it could be smelted. His father, who grew up roughly behind the Outback Steakhouse, had told him about being warned “not to play over there,” as a child. He had related those stories to Dennis.

After twenty-three years in the Roanoke Valley, this was a history lesson I hadn’t heard. I had to find out for myself.

I figured I’d call some local historians, dig up some pictures at the History Museum of Western Virginia, go hike my beloved trail and be on my way to the next story. 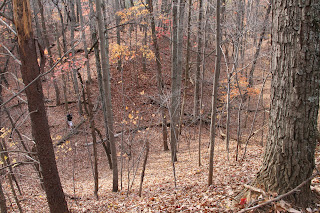 No one was able to find any pictures of the mining activity. Few had any knowledge of the mines at all. All traces of the narrow gauge railway were gone. Finally the great Roanoke historian George Kegley unearthed some valuable information, and shared what he had found on camera.

He told me that a man, who has largely been forgotten by Roanoke historians, though he is clearly one of the area’s founding fathers, owned the mines. Ferdinand Rorer is well covered in the TV report, though I did not have the space to include an interesting passage from the society page and read aloud to me by Kegley: 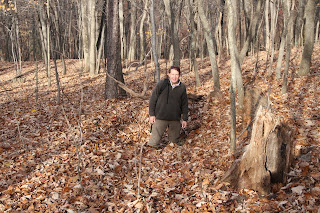 “...with his invited guests, ore cars of the narrow gauge railroad were mounted and with the whistle of the little saddle backed steam engine sounding at numerous street crossings the little engine went south and east crowing the river on the narrow gauge bridge up past colonial heights (colonial Avenue) on to the Rorer Mines. Upon return all were treated to an elegant supper at Rorer Park Hotel.“ 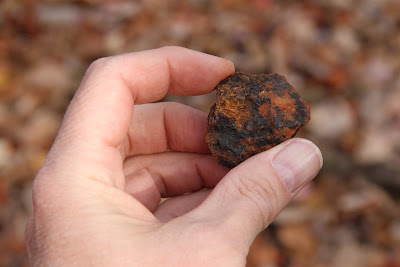 To my surprise, Kegley was energized by the re-emergence of Rorer. He tells me he plans to do further research on him.

As to the question of whether it’s about history or recreation – decide for yourself. Go walk the trail, starting from the overlook on the Blue Ridge Parkway spur about a quarter mile past the entrance to the Roanoke Mountain Campground. As you walk in a counter clockwise direction, it’s about 3 miles to the area where the ground starts to look a little unusual. Use the pictures with this blog so you can recognize the topography. 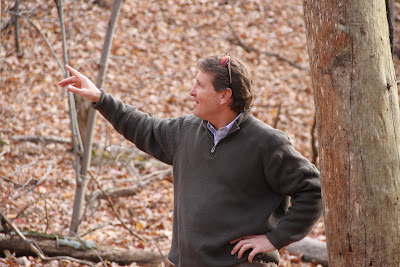 In the meantime, if anyone has old photos of the mining activity, the railroad or anything else associated with this story, please e-mail me at carlinagency@gmail.com. If there’s enough there, I’ll do a follow up. 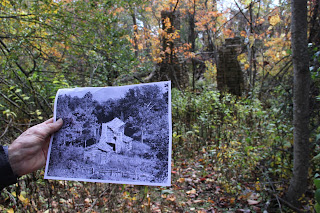 It's not everyday that you are struck with wonder about how the impossible actually happened. And yet in my report on the Sarver Cabin... That's exactly what happened.

My good friend and long-time running buddy Mark Young had been telling me for years about an abandoned cabin he stayed near while doing a week-long hike on the Appalachian Trail. It was eerie, he said. Possibly haunted. More intriguing was how anyone could have lived in such a remote location, in inhospitable conditions in the 1800's.

That story stuck with me. I had wanted to do a segment on it, but even today the only way to get there is on foot, and it's a long, difficult hike. Not the kind where we can carry all the camera gear that's typically required. (I guess we aren't as tough as the Sarvers were.)

A few months ago I purchased a Canon EOS 7D SLR camera. It's primarily a still camera used to take photographs. But after reading that some ad agencies were using its video function to shoot full-fledged commercials, and that the video quality was broadcast quality, I saw my chance to report on the cabin.

So Mark and I found a way to access the trail from the Craig County side and up we went. The hike is about 6-8 miles round trip, and the first hour is all uphill.

The turn for the Cabin is well marked as it is near an Appalachian Trail shelter built by the Roanoke Valley club within the past 10 years.

Even though we were expecting it, I had one of those moments of fulfilled anticipation as we turned the last corner and there were the remains Mark had remembered from 10 years ago.

Just as he had, I wondered how anybody could do it. Live up there on that mountain, in the cold winter months, with primitive heating and what I figured was poor land that must have been impossible to till. Why, I thought, would anyone do this?

I started calling historians. Nobody knew anything. I was about to give up and file a report on the "Mystery of Sarver Hollow."

Then I called the Craig County Library, who told me to contact the historical society, which as it turned out, knew where I could actually talk to the great great grandsons of Henry Sarver, the man who built the cabin.

Russell and Sidney Sarver had his Civil war records. They had the death certificate of cabin co-builder and brother-in-law, James Elmore, who died in Pickett's charge at Gettysburg. There were pictures of ancestors, even Sarah Sarver, Henry's wife. They are both buried on the property. There was all kinds of information -- information that answered those questions of how and why.

They were homesteaders. Improve the land for a decade and it's yours. There are springs nearby -- one of the few sources of water on the mountain.

And they cleared the land and farmed it. In 1870 it wasn't the woodsy mountaintop we see now. The brothers described it as "hilly farmland."

The cabin is pretty much gone. Trees have fallen on it, and the chimneys are about all that's recognizable. An out building is still building-shaped, but the roof has caved in. The place has suffered much just in the ten years since Mark had stayed there.

Russell and Sidney say they've been back a few times, but at 61 & 59 respectively, they say the hike is pretty hard on them.

I asked Russell if he would like to see it built back.

"If you go up there, you can almost feel the presence of ‘em," he said. "Especially those of us who are old enough to remember seeing my grandparents there. It’s actually something I think about a lot ... Yes sir I’d love to. But I don’t guess we ever will."

At least now we know a little more. We've reconstructed the story, but there's plenty of room left for wonder.

Thanks
I would like to thank and commend the folks at the Craig County Historical Society, and especially Jane Johnson and Jay Polen, for their help in researching this story. These folks don't want history to slip away from us, so they research and publish books every year. Because of Jane Johnson, I went from not being able to know anything about this cabin -- to the detailed descriptions of the lives of generations of Sarvers. Jay Polen actually took the time to come to the Sinking Creek store and interview with us. Again -- Thanks.

Follow Route 42 from the town of Newport. You'll see where the Appalachian Trail crosses the highway a few miles outside town near the community of Huffman. Hike from there. You can get about 3/4 of a mile closer by taking your next right and bearing right at the fork in the road. There is a small parking place next to the trail. Head uphill. Have fun.
Posted by Unknown at 6:56 PM 2 comments: