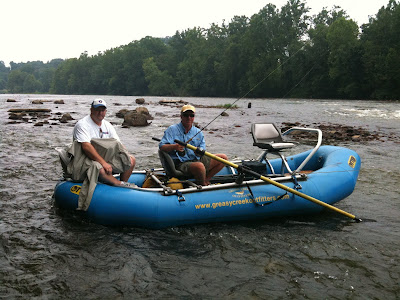 Anyone who knows my interests knows that if it were up to me, John Carlin's Virginia would actually be John Carlin Goes Fishing In Virginia.

But, that is not what the folks at Fox had in mind when we started this segment just about a year ago. "But you can do a few fishing stories," they said.

The story I've never done is muskie fishing. Muskies, for those who don't know are kind of like freshwater barracuda. They are long and slender with a mouth full of teeth. Muskies grow to be huge. Virginia anglers consistently catch monsters over 40" long.

The problem from a TV perspective is that they are really hard to catch. You can't do a story on muskie fishing, unless someone actually catches a muskie. 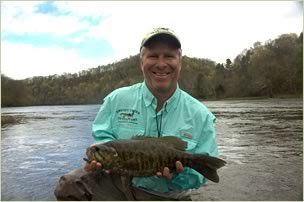 So I've been asking around to find the best muskie fisherman I could. A man who ran a campground along the New River suggested I call Mike Smith at Greasy Creek Outfitters. Mike, he said, "caught a lot of muskies."

So I called Mike and asked him if he thought he could catch a muskie in the four hours or so we could devote to the story.

When he stopped laughing, he said, "No."

"It takes 10,000 casts to catch a muskie," he said. "We might catch one, but let's shoot for a big smallmouth bass and see if we don't luck into a muskie along the way."

Turns out that Mike himself is quite a story. He holds a Ph.D. and teaches English at Bluefield State in West Virginia, where he is both a professor and a dean.

He teaches when school is in session and fishes the rest of the time, guiding other fisherman looking for his expertise on his home water – the New River. He guides for Greasy Creek Outfitters and increasingly for New River Fly Fishing, which offers fly fishing only opportunities.

“I got into fly fishing 10-12 years ago and now that’s my specialty,” he told me. “I would like to fly fish exclusively.” He still takes many clients, however who prefer more conventional spin fishing.

You’d think his time would be completely used up with the two pursuits, but he’s found a way to design flies for the Flyman Fishing Company, many of which were just released this week. He’s also written several books on fishing in Virginia. (Hey – he’s got the job I want!)

So we decided we would drift the four miles of river upstream from Austinville, throw some flies, talk about English, fly design, muskies and whatever else came up. 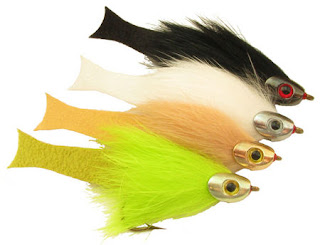 In the TV story you will see me casting a massive 10” muskie fly. Try that for about an hour and you’ll understand what tired means. As the day wore on and the muskies continued not to bite and my arm began to feel like it might fall off, I asked him if we weren’t at least close to the magic 10,000th cast.

It looks like the only thing harder than catching a muskie may be doing a TV story on it.

Posted by Unknown at 6:47 PM No comments: 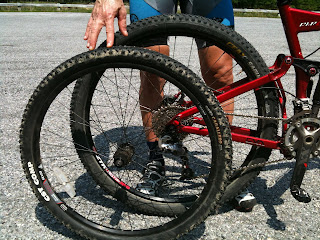 I've been around mountain bikes long enough to be dangerous. My wife and I bought a pair of his and hers entry level bikes in the late 80's or early 90's.

Back then it was a revelation. You could actually ride a bicycle in the woods!

Eventually there were better and better bikes in the garage, and racing came into the picture. I did ok in the lower classes, winning some gear and a Commonwealth Games medal. I also crashed in 1993 during a race at Snowshoe, breaking both of my elbows in the process. 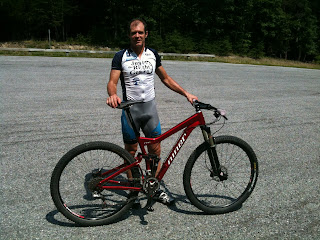 That's pretty much my mountain bike resume. I still ride some, but most of my energy in the past 10 years has been devoted to running and riding on the road.

So it was a bit of a shock when I walked into Just the Right Gear to interview owner, proprietor and local endurance legend Steve Hetherington for this story.

The bikes are lighter, faster, feature better suspension and braking systems and have an upgraded feel over the bikes I left behind when I departed the sport for skinny tires and Nikes. I felt like a 30 year old at the prom.

The newest innovation is the 29-inch wheel set. Gradually the trend is rolling over the long established 26-inchers.

"It's a gimmick," one rider told me as she cruised into the parking lot at Carvin's Cove, fresh off the trail. "I don't see any need to change." Another rider agreed, saying he had just invested in a new frame and had an expensive set of 26-inch wheels. He was more than happy with his ride. In fact he was grinning. 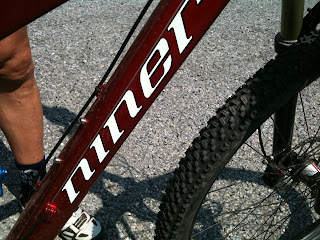 Posts on the Internet suggest the larger wheels are heavier, that they don't handle as nimbly as the 29ers, and that suspended 29ers don't have the full range of motion or travel compared to the 26ers.

I put all of those questions to Hetherington, who put most of the objections to rest. He says after three years the trend is getting stronger. Half the bikes he sells in his shop -- and he just found out it's been named to Bicycling Magazine's Top 100 list -- are 29ers. He even sells a brand called Niner, which makes nothing else.

As you will see in the TV story on Fox 21/27 in our demonstration, it's clear that a larger wheel rolls over roots and rocks more easily than a smaller wheel. Likewise, it doesn't drop into ruts as deeply. The result is an easier and smoother ride in the woods. 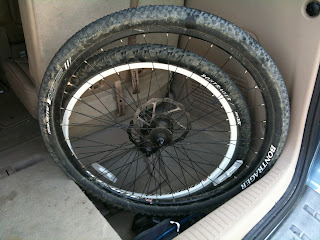 It turns out that the 26 inch wheels go back to what was available when industry pioneers were converting old beach cruisers into trail bikes. They had 26-inch wheels, so that's where the industry went.

Now it is clearly headed down a new trail, one that looks like it will stick.
Posted by Unknown at 4:56 AM No comments: