Whatever Happened to Touchdown Tommy? 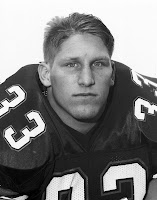 "I was having a nervous breakdown on national television and no one could see it."
-- Tommy Edwards in our interview for John Carlin's Virginia.


Tommy Edward's story is an intricate one.  We all live complicated lives, but few among us have lived so close to the edge as Touchdown Tommy.

Let me explain what I mean by "edge."  There's an edge we think of as the "cliff."  Right now the entire nation is watching the president and congress to see if we can avoid going over the fiscal cliff.  That would be bad.

Tommy has certainly gone over the cliff several times in his life as he has battled mental illness, drugs and alcohol.  But there's another "edge" as well.  And that edge is only seen by folks who have talent beyond everyday people.  Tommy's talents have taken him to places most people could never achieve.  His edges are often as close to greatness as they are calamity.

Not only is he a celebrated football player, he is also an artist and musician who has played with some big time names.  He is an entrepreneur who has started companies and foundations.

Tommy has seen higher highs and lower lows than 99-percent of us.  He's led the league in rushing.  He's created his own skateboard company.  He's recorded multiple CD's from his part-time home in Nashville.  But he's also suffered from too many bangs to the head (from football and skateboard accidents).  He suffers from mental illness that has not always been under control.  He's been homeless.

This is a tough story to tell in a TV news segment.  Tommy's story really deserves treatment in a longer form  -- a documentary, reality TV segment or a book.

In tv news we interview our subjects, do some research, take some video and put it on the news.  Tommy's doesn't fit very well in that format.  There's just too much.

What you DO get from a tv story, however is a measure of the person, just by watching the interview clips that make air.  You get a certain sense of the person that can't be described by the written word or still photos. In Tommy's case you will also see him balancing on a roller board, playing guitar and singing a song he wrote.  Life on the edge.  Or with the roller board, as Tommy puts it, "Life in balance."

And now, with the internet, I can share additional information about Tommy's talents by providing you with links to his Heart of Virginia Foundation, or his music.  Click here for a You Tube Video that shows some of his football prowess and ends with his musical talents. 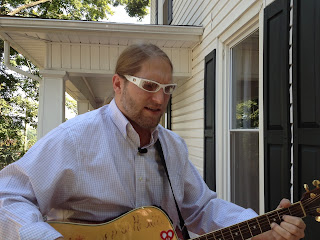 As I write this, Tommy seems to be near new levels of achievement in two aspects of his multifaceted life.  His music, which is getting more and more attention, and his advocacy for help for people with mental illness -- specifically with respect to the mass shootings that dominate the headlines.  Tommy avers that society needs to recognize, embrace and help the people who suffer from treatable disorders or we will continue to suffer at the hands of deranged individuals who somehow believe that killing others is the solution to their problems.

He's sharing the dark side of his story as a call to action.

The hook for the TV story was pretty simple: Whatever happened to Touchdown Tommy?  What happened to the kid who seemed like a lock for the NFL even when he was at Radford High School? The tv story answers those questions, but who knows where the complicated story of his life will go next?  One day the world may look at the body of his work and say, " Wow, he was also a pretty good football player."

Click here to view the Television Story that aired on Fox 21/27.

When you talk about feral cats, you begin to get frustrated.

Your reasoning goes something like this:  Cats are pets.  People should take care of their pets.  If people would just do what they are supposed to do there would be no such thing as "wild" house cats.  Can't we just go catch them all, tame them and see that they get good homes?

Another, less sympathetic line of reasoning might be:  If these "wild" house cats are causing such a problem, let's catch them and have them euthanized so they can't cause any more problems.

Neither solution will work.

That's what I learned when I spent a day last summer with Darcie Luster, a cat trapper in Floyd County.

According to Darcie, there will always be feral cats.  The best we can hope to do is manage them.  People will always drop off unwanted litters near barns, dumpsters or the side of the road.  Those kittens will create populations that will sustain themselves, unless there is human intervention. 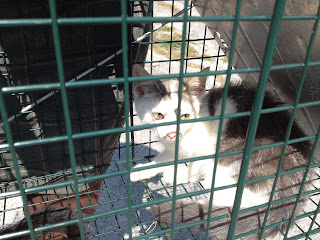 I initially had a hard time understanding the intervention part.

Darcie traps the cats, takes them to the Mountainview Humane Spay/Neuter Clinic in Christinansburg where they are "fixed," given a rabies shot and returned to Darcie who returns them to the wild.  (unless they are kittens young enough to be tamed and adopted.)

Why in the world would you return them to the wild?

Apparently, it actually keeps the numbers of feral cats in check.  The neutered cats still own that piece of territory.  They interact with other neutered cats in that zone and produce no kittens.  They also prevent other strays from taking up residence there.

Darcie says the case study in our TV segment proves it.  (As do many cases.)  The feral cat population has dwindled from about twenty down to five or six near the Floyd warehouse where we shot the segment. 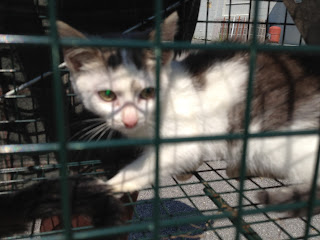 I also asked her if she ever mistakenly trapped someone's pet.  She says it happens occasionally but real house cats act differently than their feral cousins.  "Feral cats don't meow," she explained.  "That's a learned behavior that comes from being around humans."  They also act differently after they've been trapped.  They are much calmer.  "If it happens, we just take them back to their home unharmed," she said.

All in all, Darcie and Kathy Poole, president of the Floyd County Humane Society make a strong case for TNR -- Trap, Neuter and Release.

They are dealing with dozens of colonies around the county.  They have garnered widespread support, and it seems to be working.

Posted by Unknown at 6:51 PM No comments: