I told a few people that my next story would be about a local man who collects labels from tomato cans.  Most of those people looked perplexed.  Their eyes had that sort of, "Slow news day?" look.

I love this story.  It's colorful both in terms of the personality of the collector and the items he collects.  It's rare, if not unique, and it gives us a look at a time and place that we might never have thought about, if not for Charlie Woods and his 10,000 labels.

That's what I've always wanted John Carlin's Virginia to be.  We hear enough about high tech entrepreneurs.  We hear too much about Hollywood's latest darlings and scandals.  There's too much about the latest car accidents and this week -- the terrible sinking of a cruise ship.  Why not take a few minutes to see what one man has turned into a passion?

There are a couple of story lines here.  Charlie Woods collects canning labels from canneries that were once located, "up every valley and holler around here..."  That's unusual.  Who does that?  Not many people that's for sure.  In my mind, that's plenty of reason to shine a light on this.

In addition, Charlie knows the personal stories behind many of these labels.  Like the one about a soldier who wrote home that the tomatoes he ate overseas came from the local cannery and made him think of home.
When Charlie talks about this cannery or that cannery in Bedford, Franklin or Botetourt Counties, he takes you along for a ride in history.  He knows where the canneries were, he knows how they worked, how many people they employed, and how the government slowly shut them down -- mostly because they didn't meet standards of cleanliness.  He can tell you the date of another label because there is or isn't an "s" on the Boone in Boones Mill.  The "s" wasn't added, according to Woods, until 1931.

So on the surface we have a story about labels.  But really, it's an interesting tour of the history of our rural counties -- which we would not have -- if people like Charlie didn't have such interesting collections.
Posted by Unknown at 11:40 AM No comments:

Jeff Midkiff is a really good mandolin player. Really good. Virtuoso for sure. 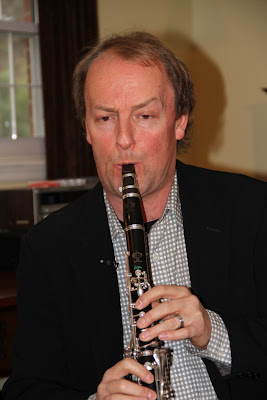 When was the last time you saw a band, orchestra, ensemble, trio or duo featuring both the clarinet and the mandolin?

Musically they go together like a Porsche at a monster truck show.

Jeff's conflict became my conflict as a writer and reporter.

Jeff is local. Easy to write into the story. "Local boy does good."

But at what? Playing music?


At the clarinet? He's good enough to do a whole story just on that. But then the mandolin is his true love. Would it be fair to do a report that included only one? Would his followers think I had missed half the story?

We writers like a simple story line. "Local boy gets mandolin from neighbor at age 7 and goes on to become world's best."

But no. Jeff has this musical schizophrenia going on. Or he did -- until the last few years when he began to combine the freedom of the mandolin with the strict discipline and daily effort that marks a true clarinetist.

Thankfully, he recently wrote a mandolin concerto for the Roanoke Symphony Orchestra. That angle gives me a way to get into all this great background -- and to structure the story so you can hear him play both of his instruments.

The fact is that, conflicted or not, Jeff is a local treasure. He makes it look so simple, while representing at the same time how hard it is to be a truly world class musician. And he does it right here in Roanoke -- where by the way he teaches music in the Roanoke School system.

I hope you enjoy the story as much as I enjoyed meeting Jeff and listening to him play his music. It really is a treat.

By the way, he also plays the fiddle.  But I just couldn't go there.

To hear more of his work, learn about his CD or more background on his career go to his website: Jeffmidkiff.com.
Posted by Unknown at 1:55 PM No comments: