What is John Carlin's Virginia? 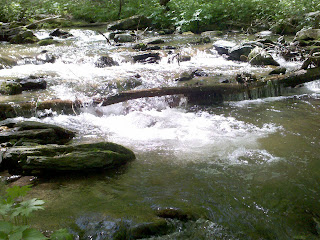 I’ve done all kinds of stories for television. Some of them have won awards. At least a few kept government honest. And later in my career I was crime reporter.

But the stories viewers always asked about were the occasional ones that profiled everyday people, showed pictures of the fish they caught, or captured some part of Virginia’s outdoor or historic panache.

To this day, my father still remarks about the pumpkin patch segment I did in Clarksburg, West Virginia in 1983. (Really Dad?)

None of this surprises me. My heart has always been in what I call “hard” features, or true human-interest stories. To be clear, a “hard” feature story is one that takes a little time to develop, write and shoot. I’m not talking about shots of puppies and kindergartners, subjects that captivate viewers just by being.

Give me a man who logs with horses, a guy who built a race car in his garage over 10 years, or the top female muskie angler in Virginia any day. I’ve seen enough of the inside of courtrooms and city council chambers.

I’ve done a few of these stories over the years, but never as many as I wanted. So often I wanted to go find a story on how watermen catch crabs on the Chesapeake Bay, but the assignment desk needed me to go to a news conference. Or, I wanted to interview a family riding across the nation on a bicycle built for 5 – but had to say on the anchor desk while some other reporter covered it. Now, that I’ve been out of TV news for almost two years, the situation is different.

The most significant change is that viewers, and therefore stations – at least FOX 21/27 -- want this type of story to add to the daily mix. Viewers want a dose of Virginia mountain heritage to compliment the latest on the Gulf Oil Spill or the President’s troubles. I’m happy to oblige.

Notice I didn’t say anything about REPLACING the regular news. We still need it and I have the same respect I always did for my colleagues who keep the world honest by shining a light on government, business or even the weather – anything that might put the common good in harm’s way.

But it will be nice, twice a month, to go shine a light in some corner of Virginia where no one else is looking. So, if you have something important to talk about, call the assignment desk. But if it’s merely interesting – Well I’ve got two shots a month.

I’ll see you out there, on the trail, on the water, in the woods. Maybe even the pumpkin patch.
Posted by Unknown at 7:01 PM No comments: