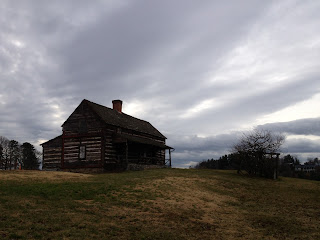 Roanoke has been trying to get in on the urban farm movement for some time now, and the city would have already been there had it not been for neighborhood uneasiness over urban chickens on said urban farm that would have been located on a portion of the old Countryside Golf Course.

If everything happens for a reason, then that happened so the farm, owned by the Roanoke Natural Foods Co-op, could land where it is now -- at the back end of the Center for Industry and Technology, and industrial center that is home to warehouses and light industry. 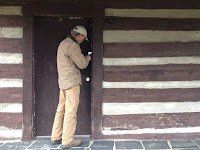 Though it's not exactly "urban" as in a vacant lot between two houses in an old neighborhood, or an abandoned industrial site, it is inside the city limits.  Add in a barn once used for the city's mounted patrol horses, a charming, if run-down log cabin and an organic agriculture expert named Sean Jordan and it is definitely a "farm."

Sean is already hard at work, raising chickens,  (inside  when we were there in November, but since moved outside.) and preparing the land for spring planting.  By this summer there will be a retail store where people who appreciate sustainably raised produce can come and fill their baskets. 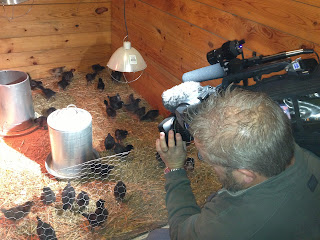 By then, Sean hopes to be living in the old cabin -- which has been renovated so many times that it will be impossible to make "original."  At least it will soon have a foundation that is not crumbling, and a roof that has not been patched with Roanoke highway and utility signs.

I was most intrigued by the cabin -- which is a big part of our TV story.  As they begin to dismantle it, who knows what they will find?  What clues as to who has lived there and how since the mid 1800's?  (And why would someone junk it up with an over sized fireplace, complete with wall safe?)

On the cold gray November Day that we were there, the farm and cabin were more of a mystery than a reality.   It was hard to imagine rows of crops, hoop houses full of vegetables and fruit trees laden with apples.  It's difficult to envision the final status of the the cabin.  But with the potential of the rolling hills,  and a group that is determined that Roanoke should take its rightful place in the sustainability movement,  you get the feeling this urban farm will be both popular and cool.

Posted by Unknown at 7:21 PM No comments: