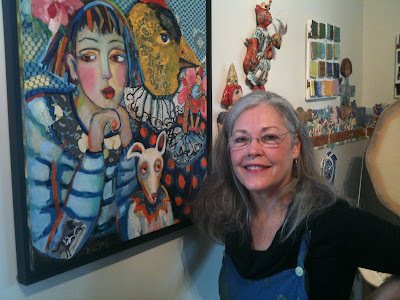 Drive the back roads surrounding Roanoke and you see a lot of lovely countryside. Forgive the cliche, but especially this time of year it's as pretty as a picture.

What you likely have not seen are the actual pictures.

Ok -- technically, I believe a "picture" is a photograph, and I'm talking about paintings, and woodworking and pottery. And as it turns out, there are a number of highly talented artists who create this work in Botetourt County.

Open Studios Botetourt, subtitled, Art in the Country is an opportunity for people to visit these artists where they work -- and often live -- in order to better understand the art and the artist. I should throw in that the art is for sale.

For my story on Fox 21/27 we had time to interview two of the artists: Ed Bordett, and Dreama Kattenbraker. We visited Dreama's home, where her garage has become a cozy studio. Ed is located in an old car dealership in Fincastle, where he paints and creates hand-crafted prints amidst a collection of cool antiques, and his own gallery. 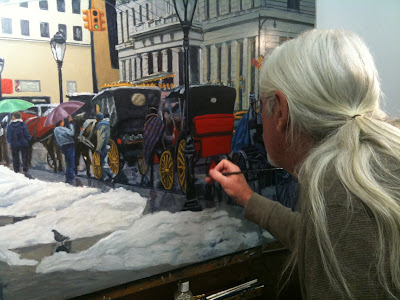 Art is like wine. You know what you like -- though I'm no expert, I can say that there is quality there. I liked a lot of what I saw. These are not amateurs or hobbyists. They take their art and their space personally. So it's a big deal that you are invited into that space.

Both Ed and Dreama felt that if people got to know the artists, learned their motivation and had a glimpse of their psyches, they might see beyond the images on the canvas. 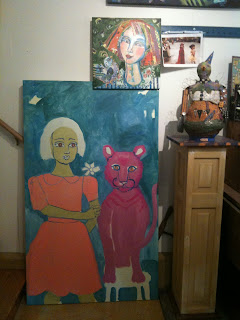 It's no secret that arts sales have been lagging in current economy. Credit this group who decided to do something about it. they created this tour. Botetourt County Tourism is helping them, along with the Bank of Fincastle. They have a marketing plan, a brochure with a map and Ed is printing lots of signs in his shop. They even have a Facebook page.
I have spent quite a lot to time with a third artist in this group. Mark Young is a long-time running buddy. We've logged hundreds of miles training for marathons, and I've had the privilege of spending time in his studio, and adjacent home, in which much of his work is displayed. When I see one of his oils, I see Mark. 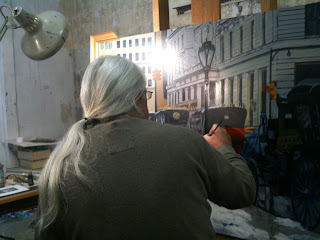 I encourage you to take advantage of where we live. Enjoy the countryside. Take a drive, see the scenery and see the art.
Posted by Unknown at 4:44 PM No comments: 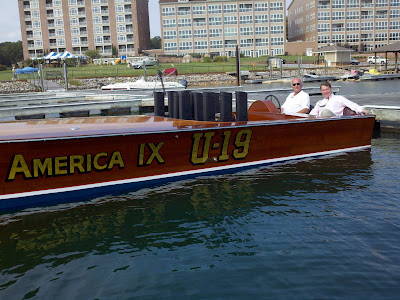 Going fast on any boat is a thrill. But going fast in the Miss America IX is more thrilling.

Not only is the wind in your face, and the exhaust from those big Chevy engines, not to mention the unmuffled noise but there is all that wood reaching out in front of you.

And all the history behind you.

Charles Mistele recognized all of that when he saw just the shell of this boat in a warehouse in the midwest. Only in his 20’s at the time, he knew this boat was special, and felt called to be the one who resurrected her. 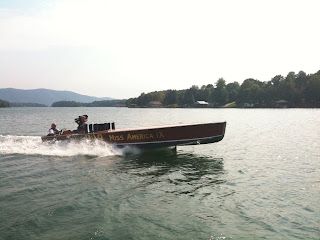 As we told you in the television story, he had told the owner that he wanted to buy it if it ever became available. When the phone rang two years later, the owner confided that another man was also interested, but Charles was first in line, if he could decide that same day. He and his wife drove several hours to see it.

“When we looked at the boat in the warehouse it was in terrible shape. The motors were missing, the wood needed repair, it was a mess,” he said. His wife went to sit in the car, while Charles poured over it and talked to the owner. 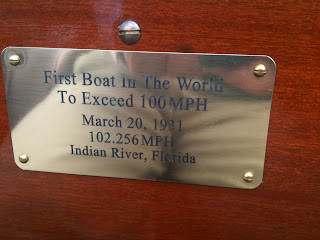 Halfway home, his wife said, “I’m sure glad you didn’t buy that boat.” Charles looked at her with a raised eyebrow and an tilt of the head that said, “Well actually, I did.”

There was an incredulous discussion that followed, where his wife noted that they did not yet have other essential things in their young lives, such as furniture.

The argument passed. But the boat survived.

Together they lovingly restored the Miss America IX. And it became the fast and furious attraction at boats shows when there was time to show it.

Then, two years ago, Diane became ill. “I almost lost her,” Charles told me as we sat by the dock.

He picks up the story from there. “She’s okay but in that process of healing she said, you know we’ve had this old boat all these years. We have to make an effort of taking this boat around and showing it at events where we’ve never been before. And I said, ‘Yeah some day we have to do that,’ and she took her glasses off and there was a tear in her eye and she said Chuck, someday was two years ago. We’ve got to get going. I don’t want you to be 75 … and look back and say I wish I had, I should have, I could have… Why didn’t I? I blew it.” 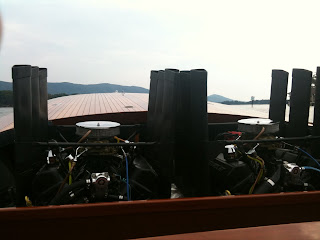 If you get a chance, you should go see it. Like I said, this boat has some history.
Posted by Unknown at 4:26 PM 1 comment: