Click here To view the TV Story that accompanies this blog.

When you look at Sarah McNair's master's thesis, sitting in her parent's back yard in Giles County only a few miles from Mountain Lake, you ask yourself, why?  Why would anyone want to live in a home that's only 150 square feet including bedroom, bathroom, kitchen and what Sarah jokingly calls the "great room."


At first you think, "This could be cool."  But then you realize it could be cool for a weekend, or maybe for a few weekends in summer or for an occasional getaway.  After all, that's why we have camping.

But Sarah has tapped into something that's a bit of a movement in the United States.  People are leaving behind all of their "stuff."  They are moving toward a less "impactful" way of living.    People are leaving it all behind, living with just what they need and nothing more. 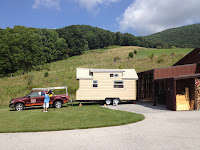 Wikipedia's report on the small house movement credits Sarah Susanka with starting the movement in 1997, with her book entitled,  The Not So Big House.

A recent blog exclaims that Americans have too much stuff and that stuff, "doesn't necessarily lead to greater happiness." 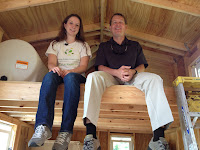 Sarah McNair mentioned all of that when she gave me a tour of the home she's been building this summer in her parents yard.  For her it is about sustainability, a smaller carbon footprint and living responsibly.  Sarah is working on her master's thesis at American Military University, which is open to both military and non-military students.  (Sarah is non-military.)

Her professors have allowed her to build this house in addition to the more traditional research paper she must write to earn her degree.  Instead of living in it, she will sell it.  Sarah says she believes int he movement, but this project is about research. 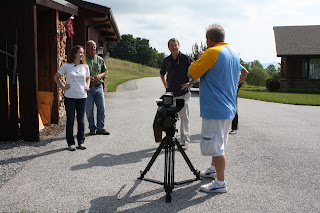 For instance she has learned that "green" building supplies can be expensive.  One of the virtues of small houses is that they are supposed to be inexpensive, "so people can live mortgage free."  Sarah did her part by purchasing a lot of the materials from used materials stores. The Habitat ReStore in Roanoke would be an example.  If people take old sinks and fixtures to the store and others buy them, then that stuff doesn't go to the landfill and the world's energy isn't wasted building new sinks and fixtures...

But there is a point of diminishing returns on the sustainability front.  Sarah figures she will have about $15,000 invested in her small house by the time it's done.  "I could have spent $50,000 if I went completely green," she told me.  That's not a bad lesson.

As much as I wanted to delve into the sustainable side of this story -- and I'm a huge advocate for sustainable living, I just couldn't get past the whole, how do you live in such a cramped space story?

So that's the focus of the TV report.  There was simple too much don't bump your head low-hanging fruit.  Where do you put your skis, aquriums, kitchen gadgets yada yada yada.  It was fun, and Sarah is a good sport.

At some level I agree that we have too much stuff.  Heck, the utility room in my basement is the same size as Sarah's house.  I'm pretty sure I couldn't even fit all the Carlin family Christmas decorations in her "home!"

So be it.  It's a cool project and it raises some good questions about the way American's live their lives.  If people want to down size, why not?

Email ThisBlogThis!Share to TwitterShare to FacebookShare to Pinterest
Labels: jcv